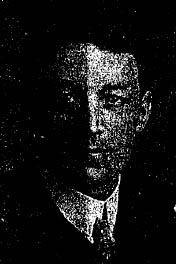 Marshal Patrick Hatton was shot and killed as he and a county deputy attempted to arrest two burglary suspects just outside of the town limits.

The two officers had setup a lookout for the two suspects, but as the morning came the two started to head back into town. As they neared town they observed the two suspects and approached them.

The two officers approached at gunpoint. The suspect, Marshal Hatton was confronting, began to run and the marshal fired several shots at him. The shots spooked the horses pulling the buggy the deputy was in, causing him to be unable to cover the second suspect. The second suspect then pulled out a .38 caliber revolver and shot Marshal Hatton in the face.

Both suspects fled to a nearby farm where they were eventually located by a posse. The suspects were shot and wounded before being taken into custody.

The suspect who killed Marshal Hatton, a 19 year old youth, was convicted of first degree murder and sentenced to life in prison. He was paroled in 1952 after serving 42 years. On February 11, 1955, he died of cancer.

Marshal Hatton was survived by his wife and three daughters.