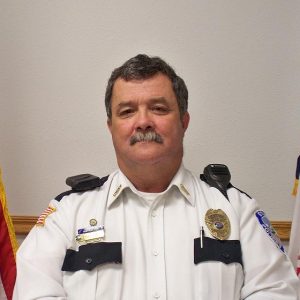 Chief of Police Robert Smith died as the result of complications from injuries sustained when he was pushed by a subject on September 20th, 2009.

Chief Smith was called to a local tavern where reports of an intoxicated male was disorderly and bleeding. The male subject had visible injuries to his face and head when Chief Smith arrived to the scene. Chief Smith ultimately arrested the subject for disorderly conduct and public intoxication.

The subject was transported to the local hospital where he was treated and released to the custody of the Chief. As Chief Smith was escorting the handcuffed subject to his marked squad car, the subject was able to escape by pushing him to the ground where Chief Smith suffered injuries to his knee, leg, head and neck. The subject was captured a very short time later.

Chief Smith sustained injuries to his neck that required surgical repair. The corrective surgery caused him to be paralyzed. Chief Smith died nine months after being paralyzed due to medical complications of the paralysis, on August 13th, 2010.

The subject was charged the night of the incident with Interference with Official Acts, Public Intoxication, and theft (the handcuffs that secured him when he escaped), and escape from custody. The subject pled guilty to the interference, all other charges pled down.

Chief Smith had served with the Stuart Police Department for 16 years and had previously served with the United States Army for 23 years. He is survived by his wife and six children.