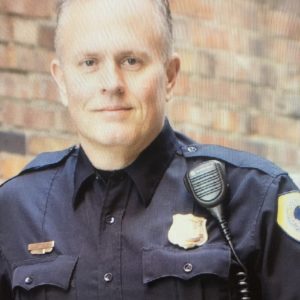 Trustee
Scott comes from a long line of police officers. He had a Great-Great Grandfather and Great Uncle who served with the Des Moines Police Department from his Mom's side of the family. Scott's paternal Grandfather (Lieutenant Ralph Baker) served DMPD 1951-1977, and Dad (SPO Dennis Baker) served 1972-1997. Scott was hired in 1990 and still serves the citizens of Des Moines as a Senior Police Officer. The Baker's have continuously served since 1951. Scott's family has over 87 years on the Des Moines Police Department. Scott's Great Uncle Verne Haubert left DMPD and went to work for the Ankeny Police Department. On January 8,1964 Verne was killed in a line of duty car accident. His family suffered deep emotional wounds with nowhere to turn for help at the time. Growing up Scott heard how his mom and her family never got over this pain. Scott was introduced to C.O.P.S. after the death of SPO Sean Wissink. Scott lost several co-workers in the line of duty, along with his family's loss, he wants to devote himself to C.O.P.S.