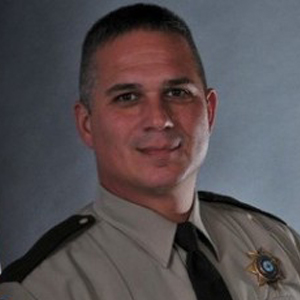 Deputy Sheriff Mark Burbridge was shot and killed at the Pottawattamie County Jail, in Council Bluffs, as he and another deputy returned two inmates to the jail after a court appearance.

As the deputies began to take the inmates into the jail one of the inmates attacked him after using a concealed key to remove his shackles. The inmate was able to obtain a firearm from the van and shot both deputies. He then stole the transport van and fled from the jail. He shot a citizen nearby when he attempted to carjack the man. He then abducted another citizen and forced her to drive him from the scene in her vehicle.

The subject was located by Omaha, Nebraska, police officers after releasing the woman. He was taken into custody following a high speed pursuit and charged with numerous felonies related to the carjacking and weapons possession. The man had just been sentenced to 55 years in prison after pleading guilty to murder.

On August 15th, 2017, the man was sentenced to life in prison for Deputy Burbridge’s murder and related charges.

Deputy Burbridge had served with the Pottawattamie County Sheriff’s Office for 12 years.